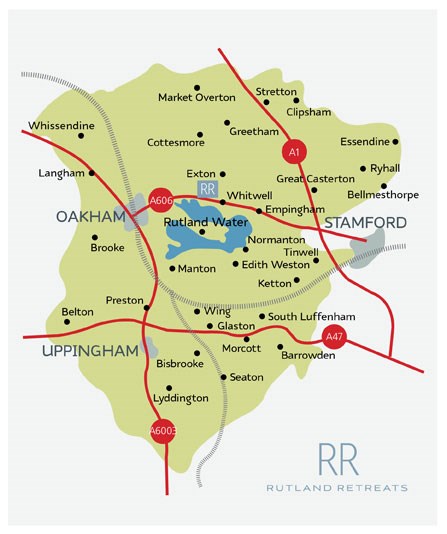 Rutland is a landlocked county in central England, bounded on the west and north by Leicestershire, northeast by Lincolnshire, and southeast by Peterborough (a unitary authority ceremonially in Cambridgeshire) and Northamptonshire.

Its greatest length north to south is only 18 miles (29 km) and its greatest breadth east to west is 17 miles (27 km). It has the smallest population of any normal unitary authority in mainland England and only the City of London is smaller in terms of area. It is 348th of the 354 districts in population. It is the smallest historic county in England and the fourth smallest in the U.K. as a whole, after West Lothian, Kinross-shire and Clackmannanshire. Because of this, the Latin motto Multum in Parvo or "much in little" was adopted by the county council in 1950. Among modern ceremonial counties the Isle of Wight, City of London and City of Bristol are all smaller. The former County of London, in existence 1889 to 1965, also had a smaller area.

The only towns in Rutland are Oakham, the county town, and Uppingham. At the centre of the county is the large artificial reservoir, Rutland Water, which is an important nature reserve serving as an overwintering site for wildfowl and a breeding site for ospreys. The town of Stamford is just over the border in a protruding part of Lincolnshire.

Rutland's older cottages are built from limestone or ironstone and many have roofs of Collyweston stone slate or thatch.